It’s August at the Lake.

I should be writing about our recent houseguests, a family that includes two delightful teenagers. Yes, there are really nice teenagers. I know this from direct observation.

And, I would like to describe the clear cool water, the loons diving for their dinners, the four-pound smallmouth that took a surface popper on the first cast a couple of nights ago, and the eagle that has nested across the way. All these things are beautiful, lyrical, like the sky in the few minutes after sunset, still glowing with the memories of pleasant days. 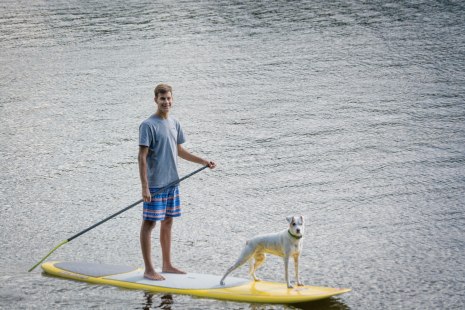 But…I just had lunch. I fixed it and ate it by myself. It was a pretty mundane lunch: extra-crunchy peanut butter and mixed berry jelly on whole wheat with a small bottle of fizzy water. So, while I crunched, I entertained myself by reading the July issue of Nature Biotechnology.  This is not as technical as your average Car and Driver, but still, it’s pretty technical. The news items included a piece on chimeric antigen receptor T-cell therapy and another one on protein scaffold drugs, relatively small polypeptide chains that maintain the binding specificity of antibodies. Then I turned to another item describing the conjunction of artificial intelligence and drug discovery.

Then I stopped, and tried to think for a minute. What do these bits of news mean and, more importantly, what do they imply for the future? Of course, the future is an assumption highly dependent on the statesmanship of leaders like Kim Jong-un and Trump the Donald. As Nat King Cole wrote, “Tomorrow may never come/ For all we know,” and old Blue Eyes answered, “The fundamental things apply/As time goes by.”

I digress. First, these news bits show us the incredible pace of change in biotechnology. Remember, kids, it has less than 75 years since Pauling’s work on protein structure and just 64 years since Watson and Crick described the structure of DNA! What a ride!

But what does this news imply for the future? I don’t mean, what will the next rabbit to come out of the hat look like? Much more important than that, I mean what happens to our society when having a good job means that you have to understand some physical and organic chemistry, a smattering of X-ray crystallography, and have a nodding acquaintance with deep-learning algorithms?

I just spent a week with my younger son, Drew. While he recovered from a total hip replacement (so much for eugenics!), we had plenty of time to talk. He teaches young adults in New York City who want to attempt the TASC (Test Assessing Secondary Completion) exam that leads to a High School Equivalency Diploma. These students, and millions more like them across the country, are totally unprepared to deal with the STEM (science-technology-engineering, math) material that’s required today for employment in the modern world. They don’t have the academic skills, the basic reading and math knowledge, to learn STEM material.

Economic inequality is real, and it’s easy to measure and show on a graph  . But for tomorrow, the critical issue will be educational inequality. Yes, they are highly correlated, but they don’t have to stay correlated. We could try to make sure that the next generation has a chance to acquire better academic skills, that they don’t go to school hungry and come home to violence.

Oh, but that might take some government interventions. Whoops.