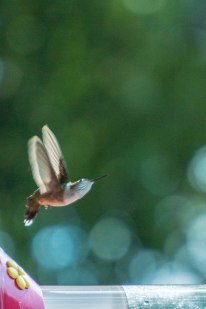 I captured the hummingbird images accompanying this posting while sitting quietly on our deck at camp. They are fascinating creatures. (If you hover over the photos, you should be able to click and get full-screen images with camera data.)

I ‘m leaving in two days for a short fly-fishing trip to Lewis and Clark country with a local group; we’re fishing the Missouri outside Craig, Montana. It will be a chance to tune out the clamor of the election for a couple of days, and I look forward to it.

Meanwhile, I want to direct your attention to a couple of items that caught my eye recently. The first was a comment in a New York Times article that referenced a piece that appeared in Slate. The data are well-referenced, and even if off a few percentage points one way or another, they are frightening. No, not the latest election polls, but the fact that more than half the world’s population does not have access to flush toilets. In fact, yesterday the Science section of the Times reported that a half-million homes in the US don’t have adequate plumbing. Simple sanitation, with sewage treatment, access to clean water for washing and drinking, and preventive immunization are the foundations of public health.

The second issue is a World Health Organization report that appeared on Sept. 27th, and was the subject of a New York Times piece by Mike Ives. The data indicate that over 90% of the world’s population breathes air with unsafe levels of fine particulates. Perhaps just about now, many of you think I have gone off some sort of deep end. Give me just a second. My older son, David, is an environmental economist who has worked on the health costs of particulate pollution for a couple of decades. The health costs are real and well-documented.

Recently my former chief at the Cleveland Clinic, Eric Topol, published a book titled The Creative Destruction of Medicine. In it, Eric advocates for his view of highly personalized medicine with management informed by genomics and driven by constant data acquisition using smartphones or similar devices. My simple view is that genomics and personalized medicine is a bridge too far in the war on disease when millions of humans don’t have toilets, and few of us can avoid inhaling particulates with every breath. And when our ageing infrastructure holds the potential for many more Flints here at home.

The official White House website   https://www.whitehouse.gov/the-record/climate  states that President Obama believes, “no challenge poses a greater threat to our children, our planet, and future generations than climate change.” Whatever your political persuasion, I think we can all agree that the President is a bright man who has a remarkable context in which to decide what issues merit the most concern.

I think those of us in medicine and in the pharmaceutical industry have a responsibility to the public. We continue to see hospitals competing with ads for their cancer centers, heart centers, bariatric programs, and joint replacement surgeries. We continue to see drug companies advertising new agents with short spots that build unrealistic expectations of benefits and minimize risks. Let’s speak up to the public through our professional organizations, and push for a few years of redirecting these institutional advertising budgets toward real public health: clean air and clean water!

Here is a link to an on-line preview of a book featuring Katherine’s photography. I compiled and edited her work in Lightroom, and provided the text. The title is Tsylos…’Bows, Bears, & Broncos.

Please have a look at a spectacular place, and enjoy it with us!

Here at the lake, Labor Day has passed us by with gray days and dark nights punctuated by thunderstorms. Our Lab, with her acute hearing, hops off the bed and shelters in her crate “when the lightning walks about.”

Drug prices continue to get headlines from Consumer Reports to the Wall Street Journal. In fact, out of all the discussion, a consensus seems to be emerging in favor of legitimate price bargaining between insurance companies and the pharma companies. Will it happen? Who knows? It will depend on legislative, not executive, action.

Which leads to the current political situation. On March 5th of this year, I wrote a review of Jane Mayer’s Dark Money. To wrap up, I said, “What I find deeply disturbing about Dark Money is the weight of evidence Mayer has gathered to support the concept that a very limited group of very rich individuals has developed a strategy to indirectly exercise influence far out of proportion to its numbers.”

On the front page of the New York Times today , Ashley Parker and Maggie Haberman reported on The Grassroots Leadership Academy, a new Koch-funded organization that provides “a training program dreamed up by the Americans for Prosperity Foundation, the political education arm of the Koch network, and intended to groom the next generation of conservative activists to shape the future of the Republican Party.”

How do we deal with all of this: the bizarre presidential campaign, the gerrymandered voting districts, the repeated attempts to disenfranchise segments of the population?

Here are two options. One, recognize that the lightning is walking about and hide in your crate. Posie will keep you company. Or, alternatively, watch an inspiring video trailer from a group of my Amherst classmates.  The words of Robert Frost and President Kennedy  will inspire you to take a deep breath and get back into the fray.